Are Chinese trackless Trams the Best New Thing to Hit the Road in your City?

March 31, 2020
The way urban transport and the mobility industry have changed in the last years has no similar precedence. Traditionally, private cars and public transport have been the common choice for urban mobility, now enlarged by a plethora of new app-based mobility services such as ride-hailing or scooter-sharing which have permeated our cities. More recently, the focus is moving towards promoting innovations in public transport against car-based solutions in urban environments, also in China. 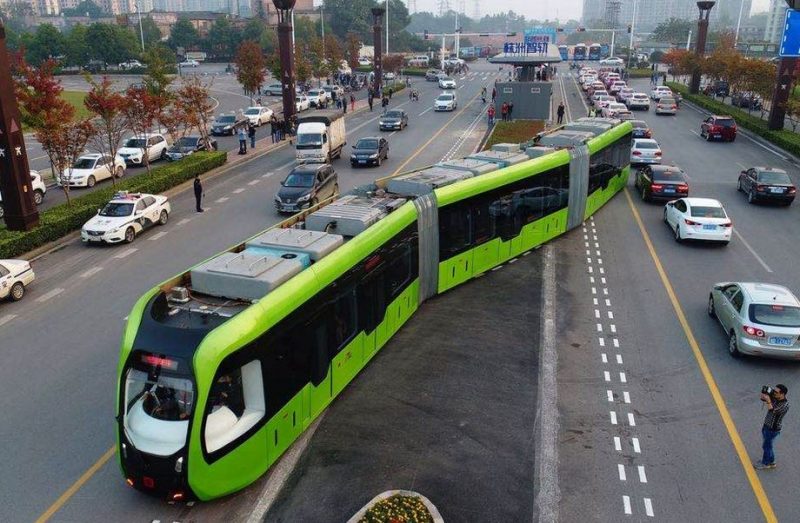 For decades, China has invested in the development and expansion of its public transport infrastructure including High-Speed Railway (HSR), subway and Bus Rapid Transit (BRT) systems. But China also has promoted public transport innovation, in particular in the field of vehicle automation. A different approach to urban transport is the trackless tram, also known as Autonomous Rail Transit (ART), which caught the attention of the international transport community when it was unveiled by China Railway Rolling Stock Corporation (CRRC) in 2017.

The trackless tram combines the capabilities of traditional light rail with some of the advantages of buses. The key disadvantages of light rails are their operation rigidity and high investment costs for rail and catenary infrastructure. The trackless tram is running on rubber tires on normal asphalt roads and thus does not require rail infrastructure. While this technically puts them closer to urban buses, trackless trams still provide large capacity – 300 to up to 500 passengers.  The trackless trams were first tested in 2017, starting commercial operation in 2019, in the South Chinese cities of Zhuzhou and Yibin. The articulated vehicle is bi-directional (it has a driver cabin at each end) and comprises three sections, each of them with capacity for 100 passengers.

While not being a disruptive transport innovation -and in fact very close to bi-articulated buses-, trackless trams with limited investment needs and construction impact can be an innovative and viable alternative for cities which are looking for the capacity of a tram system but are not able to mobilize sufficient resources and public support. Trackless trams, as complement to trams or BRT systems, could potentially be applied to serve low density urban areas, to connect urban and sub-urban areas or to areas where rail construction is not possible.

On behalf of the German Federal Ministry for the Environment, Nature Conser vation and Nu­clear Safety (BMU), in partnership with the Minis­try of Transport (MOT) of the People’s Republic of China, the project “Sino-German Cooperation on Low Carbon Transport” (CLCT) is being im­plemented by GIZ.

Trackless Tram in the city of Zhuzhou. Photo by: CRRC Zhuzhou Institute